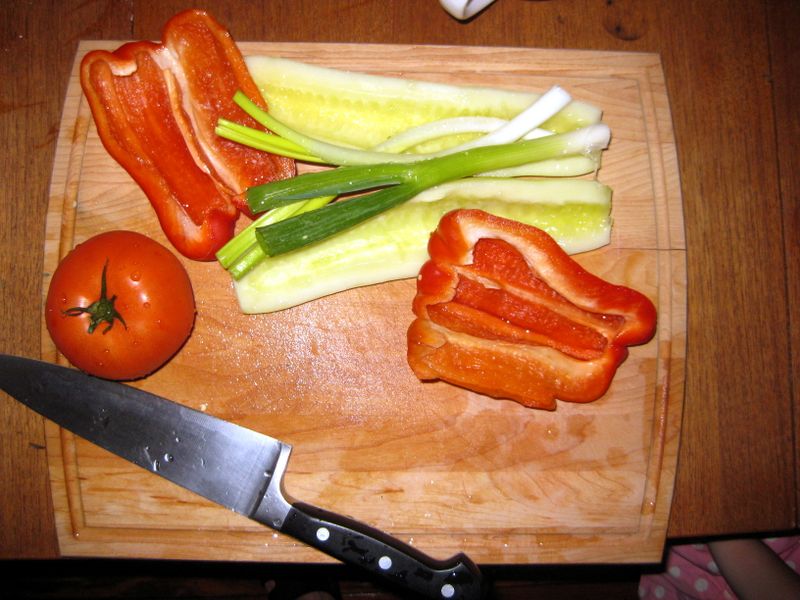 Put three people in my kitchen and it starts to look like one of those pictures of a fraternity prank from the nineteen-fifties in which college students would pile into a telephone booth for amusement. My kitchen is typical of New York City. It is, in a word, small.

Often, I’m the only one working in it. Most of the time I’m quite content to be alone. It is my little universe and I have ultimate authority there, at least as far as the cutting board and the dishes go. (I think that having the opportunity to be in control is one reason some men gravitate towards the kitchen, but that’s something I’ll explore later).

Sometimes, however, I get lonely. Most mornings, Santa Maria typically takes charge of breakfast. She’ll make the girls cocoa and pour their cereal. Our dining room is set off from the kitchen by a wall. I’ll stay on one side of it, preparing the food for the day like some kind of Italian grandmother in a mountain village, and they’ll sit on the other side of the wall sipping their cocoa and laughing. Santa Maria will call for me to join her, but I’m too intent on completing my work to take her up on it.

Yesterday, I came up with a partial solution. I took my cutting to the dining room table. After washing the fresh vegetables that comprise one of my staple dishes, a fresh quinoa salad, I sat down with Nina and Pinta and proceeded to chop away.

Nina turns her nose up at most fruits and vegetables, aside from broccoli, which she somehow does not know that she’s not supposed to like, and asparagus, which is fine in the spring, and environmentally and economically problematic the rest of the year. She likes bright colors, though, and she sat next to me as I sliced through the bright red pepper, shiny cucumber, and lustrous scallions.

She remarked upon how the tiny cubes of cucumber stick to the side knife and how the collapsing bits of red pepper do not. It’s not as easy for me to cut vegetables sitting at a table as it is for me to do so standing up, but I get the added benefit of sharing the meditative and ultimately rewarding experience with my children.

Rinse the quinoa well, at least three times.
Cook in two cups of water as if you were cooking rice.
When the quinoa is cooked, put it in a large bowl to cool.
Combine it with the chopped vegetables.
Dress with lemon juice (or white-wine vinegar) and olive oil.
Salt and pepper to taste.