Chicken Soup for the Soul

Sometimes I think I have O.C.D--Obsessive Cooking Disorder. Take Tuesday morning, for example. I didn't know what to do with myself. Santa Maria wasn't getting along with the kids. They were having a real Daddy moment. Santa Maria wasn't, and I was left feeling torn between being a father and being a husband.

So what did I do? I started cooking; I threw some pork loins under the broiler and put on a pot of rice for that night's dinner and then started peeling scallions for my lunch of tuna salad (I make mine with nothing but lemon, olive oil, scallions, and dill; it's delicious).

Then, like some desperate sinner I continued my culinary self flagellating. I decided to make chicken soup. I have never been much of a fan of the dish, but this recipe has grown on me. It's Santa Maria's, and I've taken to doing most of the labor whenever we make it. On Tuesday morning, I did all but throw in the spices.

The soup takes a little over an hour, not including picking the chicken. I'd been cooking for hours before getting to that labor-intensive step. Usually, I leave it to Santa Maria to pick (she's more careful than I am), but Tuesday was about purifying the soul. I picked the bird before running to the office. While working my fingers through the hot flesh, I wondered what the hell was wrong with me. Why did I need to make three meals before starting the day?

My answer came tonight: I might be an obsessive cooker, but that's because we, as a family, have obsessive appetites (praise the Lord that the girls seem to have inherited my genes for a fast metabolism).

I returned from work a little early because Santa Maria was going to get her hair cut. She's found a fancy Madison Avenue stylist who cuts hair at her home in the evening at a discount. The only downside is that she lives in Bushwick, a geographically close neighborhood but one that is practically a galaxy away when visited by subway. It takes Santa Maria an hour each way.

Santa Maria had fed the kids fish sticks for dinner. They ate them walking around the neighborhood, and I met them on their wanderings. When we came home, though, the kids were still hungry, and one can only give one's children so many Goldfish (even if they are whole wheat) before they revoke your license to parent. So after the third serving, I started offering them Gruyere, Mozzarella, and, yes, chicken soup. Nina ate two bowls before her bedtime. So did I. And so did Santa Maria after she got home.

Put the rice on to cook. Add a bay leaf or two and salt if desired.

Heat some olive oil in a tall stock pot.
Add the onions, carrots, and celery.
Saute until the onions are translucent.
Add the garlic and chili pepper.
Saute until the garlic is soft.
Rinse and add the whole chicken to the pot.
Add enough water to the pot to cover the chicken.
Add the bay leaves, lemon halves and juice, and other spices.
Cover and bring to a boil.
Reduce to a simmer.
Cook for about an hour, or until the chicken is cooked through.
Remove the chicken with a slotted spoon.
Remove the lemon halves, chili pepper, and bay leaves.
Pick the meat from the chicken and return to the soup.
Stir in the rice.

Here's how it looked late this evening as I heated some for Santa Maria after her hair-cutting expedition. 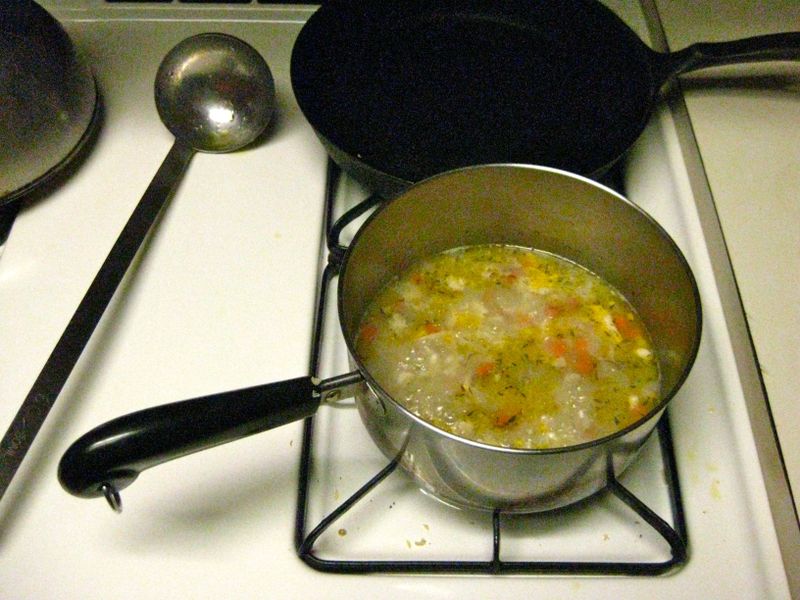