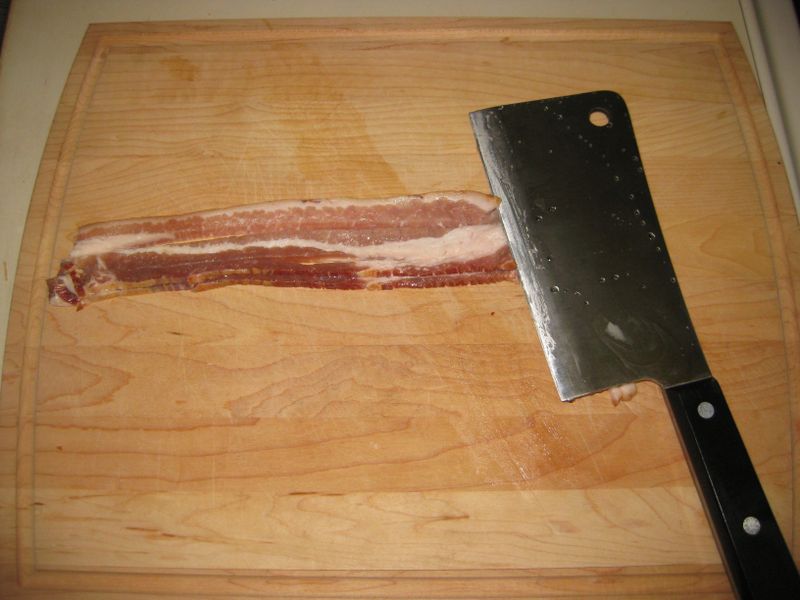 I had a productive morning today. First, I made a big pot of dhal. Santa Maria had some friends coming over and we wanted to serve them lunch. Then I started an even bigger pot of chicken stock. Then I worked with Santa Maria to compile a menu for the week and a shopping list. Then I went off to the Food Coop to get our groceries.

In my flurry of productivity, I forgot one thing: what I would eat for dinner tonight. I only realized this on my way home after work. I considered stopping off for a burrito at our local take-out joint, but thought better of spending the eight dollars when I remembered that I had dropped $232 this morning buying organic food for the week.
So after helping to get the kids into bed, I started thinking about what I could cook myself. Well, first I did the dishes, because I can't think straight in a messy kitchen. Then I decanted and filtered the chicken stock and put it in the refrigerator overnight so the fat in it will float to the top.
Doing this little bit of kitchen labor helped me clarify my thoughts. I considered what was in the cupboard, and what about that burrito had tempted me. The neighborhood burritos are very tasty. They are restaurant food, obviously, and to my palate restaurant food is always one or two decibels (to mix a metaphor) too strong. It's all that fat and salt. On the other hand, sometimes that's what one wants.
The first salty and perfectly fatty thing I could think of was bacon. And I wanted something green. As usual, we have frozen peas on hand. The two seemed destined for each other, over pasta, with Parmesan cheese. So much so that when I mentioned what I wanted to do to Santa Maria (who, by the way, was more or less content to warm some left over chicken-rice soup for herself), she said, "Yeah, carbonara."
Not quite, baby. No eggs for me. And, anyway, who ever heard of peas in carbonara? How can I help it if bacon is tasty. I put on a pot of water for the pasta, and started to saute some finely chopped bacon. I thought of what else to add, and settled on pine nuts. Why not?
The bacon wasn't browning properly because I used too large a pan. So I added some olive oil, and it started to sizzle. I tossed in some crushed red pepper because that would keep the sizzling going in my mouth when it came time to eat it. One of the liberties of cooking after the kids go to bed is that I can really spice things up. And before I finished the dish, I tossed in a thinly sliced clove of garlic to tie it all together.
This wasn't the first time I had made an impromptu meal involving various ingredients and some pasta, but it was the first time that it came out so well. And of course, Santa Maria wanted some too. I was happy to share mine. A little bit of that fat and salt goes a long way for me.

Put a pot of water on to boil.
Saute the bacon in a large frying pan, and add the crushed red pepper.
Put the frozen peas in a small pot with some water and boil for a few minutes, until they are a bright green, not a dark green, and then set them aside.
If the bacon is not getting crispy enough, add some olive oil.
Toss into the pan the pine nuts.
When the bacon is crisp and the pine nuts are brown, add the garlic.
When the water comes to a boil, salt it heavily, and add the pasta.
Add the peas to the frying pan with the bacon and other ingredients.
Combine the pasta in the frying pan with the rest of the ingredients and add the cheese.