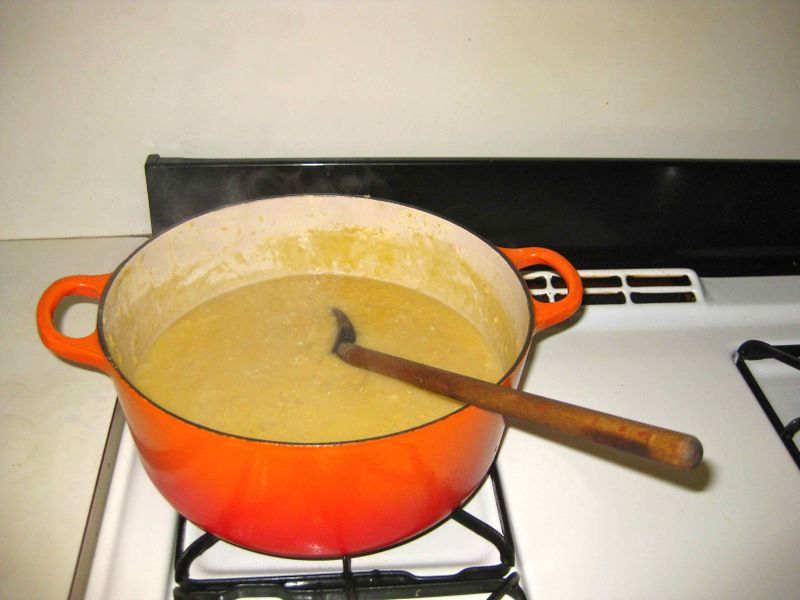 The other day I was reading to Nina "The Amazing Bone" by William Steig. Like all great children's books, it leavens the sweet and magical with the savory and dastardly, in this case, a hungry fox (a popular Steig creation). During one passage, the fox is preparing to eat for dinner the main character, a lovely little pig named Pearl. The fox stands in his kitchen, sharpening his knife on a steel, while Pearl looks on (she's soon saved by the title character, that amazing bone).

Recently, I was in our kitchen making one of our favorite staples, an uncompromising red lentil dhal. The first step is slicing up some onions, so I reached for my sharpening steel and started to drag the blade of my knife up and down its rough spine. Nina was looking on, and she said "You're just like the fox." Indeed.

I make this dhal almost every week. Santa Maria is crazy for it (as are the kids). She's spent a lot of time in India, and I love when she tells me there are no dhals like this in that whole country. I can't really take credit for its delicious mix of ginger and lemon—my recipe is adapted from "Food & Wine Magazine's 2001 Cookbook."

I cooked up a double batch of it on Saturday for Pinta's second birthday. At least two people at her party asked me how to make it. Here's how:

Red Lentil Dhal
Heat the oil in a heavy sauce pan
Add the onion, bay leaves, and cinnamon stick
Saute until the onions are translucent
Add the garlic and the ginger and the cayenne
Continue cooking another few minutes
Add the lentils and stir to coat them with oil
Add the chicken stock and the water
Add the lemon juice and the squeezed halves of the fruit
Add the salt
Bring to a boil
Reduce to a simmer
Cook for about a half hour, until the onions mostly break up and the lentils more or less dissolve. If it looks like it needs more water, add some.
Notes:
This freezes remarkably well. It is best served with rice. To make it more fancy, caramelize some onions to go on top, along with some plain yogurt, and some chopped cilantro.