How Much Pork Does a Man Need? 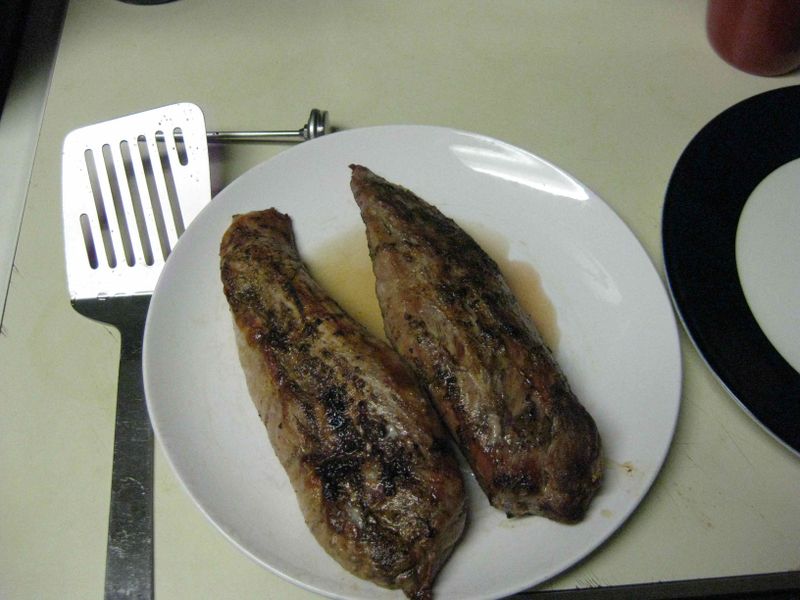 I took Friday off from work to spend a long weekend at my mother's house, in upper Westchester. The night before we left, I still had that mountain of clean basil (not having been in the mood--perhaps because it's not yet summer--to preserve it as pesto) and a pair of pork loins that needed to be cooked. These are the perfect ingredients for a warm salad. Santa Maria came up with this recipe a few months ago, and I loved it so much that I was looking forward to making it that Thursday night.

I got home from work late, but not so late that I couldn't cook the dinner. Santa Maria was on our bed reading "Anna Karenina" when I started roasting two pork loins (far more than I needed, but I knew the leftovers make great sandwichs and we would want some of that meat on our trip north).

I use a variation on a recipe I got from Mark Bittman's "How to Cook Everything." I pour some olive oil in a small bowl, add a shake (about a teaspoon, or more) of Garam Masala, and some mustard, along with salt and pepper. I spread that on the lions, throw them on a baking sheet, and put under the broiler for about a total of about fifteen minutes, rotating them once or twice to make sure the get brown but not burned. I cook them to about 145 degrees, which leavs some pink meat but no risk of trichinosis.

At the same time, I roasted some asparagus that I had sprinkled with olive oil and salt and pepper. Usually I do these at 350 degrees, but I wanted to cook them at the same time as the pork, and I only have one oven. I couldn't leave the there when the broiler was running as they would burn before they would cook. So I put them in the oven for a few minutes, transfered them to a cast-iron frying pan, and kept them cooking at a very low heat until the pork was done and I could return them to a more hospitable oven.

The warm salad is easy to make (the only other major ingredient is rice, and I had cooked some that morning), but I was too tired to be bothered. I called to Santa Maria to tell her that the dinner was ready, but she was having a hard time taking a break from her book. I couldn't blame her. As good as my ingredients are and as much care as I take with my internal temperatures and spice mixtures, I would have to be a hell of a lot better to compete with Tolstoy's prose, even in translation.

Santa Maria finally strolled into the kitchen and promptly set out to make her salad. She cut up the pork, the asparagus, and mixed it with the rice, added basil and dressed it with a vinagrette. I was jealous. She was so ravenous that she couldn't even take a break long enough to let me photograph it. 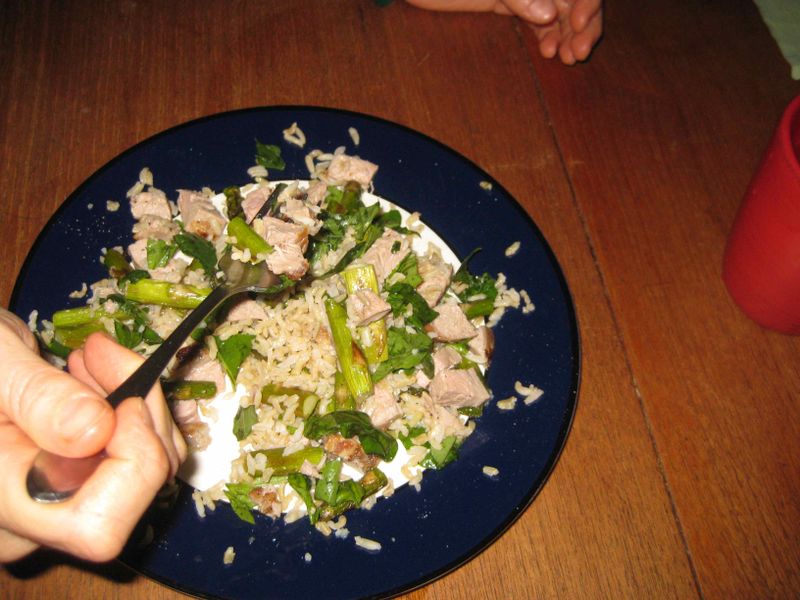