Home Archives About
What the Critics are Saying
Elemental Tricks 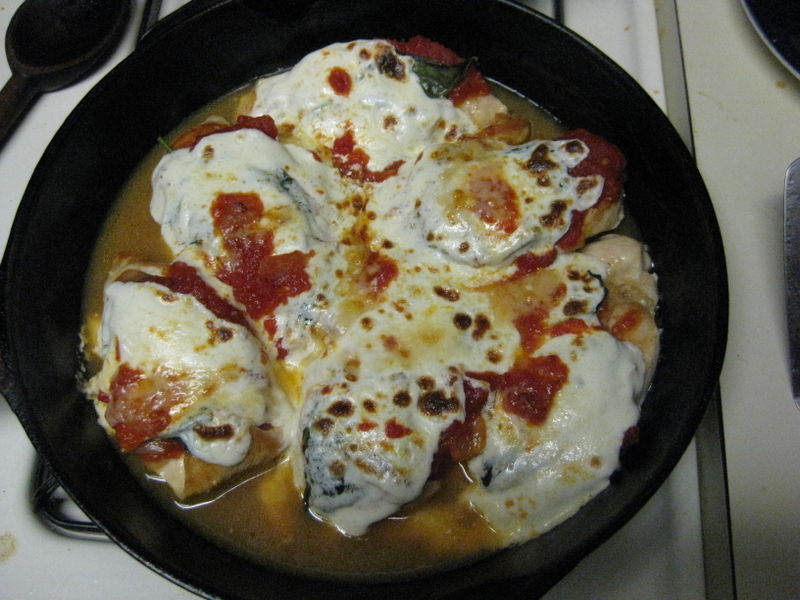 While doing our weekly grocery shopping on Sunday, Santa Maria was struck by a last-minute desire. We were standing at the checkout station, about to tally up the final bill, when she realized that she wanted Chicken Parmigiana. Her eyes were wild and her smile was broad and she ran off to gather fresh basil, mozzarella, and chicken breasts. We had new dinner plans.

I'm not big on fried foods, so my recipe doesn't really look like Chicken Parmigiana. In stead of breading and frying the chicken, I brown it intensely in a frying pan. I like the flavor I get and it's a lot less work (and there's a lot less fat and calories to worry about).

It's also a very fast recipe, assuming you've done some prep work. I was in the habit of making this dish every couple of weeks last summer, but it had been a few months since I last prepared it. I forgot about the necessary prep work. Such as washing the head of basil. Or sweating the onions for a sweat marinara sauce.

The key to making this successfully is to pay close attention to the details.

1 tablespoon olive oil
1 tablespoon butter
one onion, chopped
one 28 ounce can of peeled plum tomatoes, diced or hit with an immersion blender

Melt the butter in a sauce pan and add the onions. Sauté them until they are translucent. Do not brown them. This takes time and cannot be rushed. The best way to cut the onions is to chop them. I diced them on Sunday night because I was afraid that the kids would object to them in the sauce. The tiny diced pieces of onion were hard to soften up without browning them at the edges. The onions were not the only things sweating in the kitchen.

Once the sauce is made, the rest of the dish is easy:

1 pound of boneless chicken breasts, sliced in half lengthwise so they are thin.
enough pieces of fresh basil to cover the chicken breasts with one layer
a similar amount of sliced fresh mozzarella cheese
a few slices of fresh parmesean

Turn on your oven's broiler.
Heat a cast-iron frying pan until it is smoking.
Add some olive oil and layer in the chicken. Brown them intensely.
Once they are brown on one side, turn the pan off, flip them over, and put a dollop of sauce, a leaf of basil, a slice of cheese, a touch more sauce, and a bit of parmesean.
Place the frying pan under the broiler until the cheese melts and becomes bubbly.

Serve the chicken with fresh pasta and the sauce.

It took a little longer to prepare than I remembered, but it was worth it. Now if only I could get the kids to agree. They didn't like it much at all. I got Nina to eat some of it by calling it Chicken Pizza (as it has many of the same ingredients). Pinta wasn't interested in any of it, even after I poured off the chicken juices and made it into a soup for her. She liked that for a few bites, then pushed the bowl away.

The thing is, I knew this was going to be the case. Last summer, when I was making the dish on a regular basis, I never served it to the kids. I knew they weren't going to go for it. That's why I was sweating so much while making the sauce.