Home Archives About
Another Day, Another Bolognese
Last Minute Meal 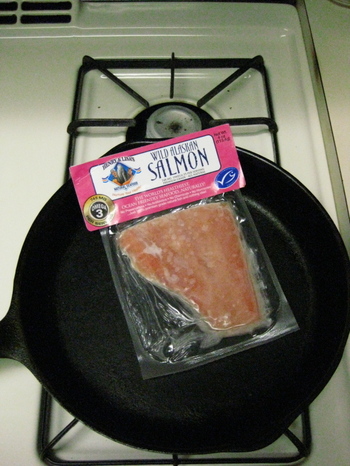 When I was about to get get married, I sought advice from friends who had exchanged vows before me. It's one of the things I do compulsively: solicit information about a given subject. I canvassed a just about everyone I met with a wedding ring. Mostly I was given suggestions from the "don't go to bed angry" school of thought. One friend surprised me with his advice, though. He considered my question for a second and than shot back a shocking idea. The best thing I could do for my marriage,  he said, was to be nice to my spouse.

I thought being nice was a given, but that was before I was married and had children. It's not always so easy. One of the ways I try to do so is to make lunch for my Santa Maria, who's been known to be too crazed during the day to cook anything for herself. This morning I was planning on making her lunch, (sauteed a salmon fillet to go over a bed of freshly washed Romaine lettuce), when we got into a fight.

We'd been away for the weekend at my brother's wedding, and the house was in a minor state of disarray. The suitcases had been returned to the closet, but the bags of out-of-season clothes, piles of miscellaneous old toys, and boxes of nice books that we want to read (someday, just today), that I had taken out of the closet along with the suitcases in a misguided attempt to get organized, were still on the floor. Santa Maria said something had to be done about them.

My reply was not mean, but it was not nice. As was Santa Maria's reply to my reply. Accusations flew, mostly, and justifiably, in my direction about "not doing anything on Friday." It was true. The day we had to leave for the wedding, the day I could have put back the piles of stuff at our feet, I was too distracted by the upcoming trip to be of any use. My brother was counting on me to officiate his ceremony and I was extremely preoccupied with that responsibility. It was as if I was trying to swim with my clothes on. It took me hours to pack for a weekend trip. I was stung by being told that I had done nothing, when in fact I had loaded the car, packed it, and driven us the two-hundred plus miles we had to go to get to the wedding. But I've been married seven years now and I've learned to not to overreact (having gotten us lost in Queens on the trip, I thought better of mentioning the drive). Instead of saying anything in response, I thought of the times I might have said something not quite so nice myself. I thought I might think twice about throwing a barb next time.

I put the salmon on to saute, and I wondered how it might taste, cooked with so much emotion in the air. I'd like to say I wasn't mad, but I'd be lying. As the fillet cooked, I tasted it to see if it was done. It tasted fresh and salty.