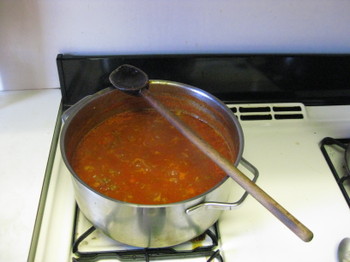 I've gotten so quick at making some of my favorite dishes that I could make them in my sleep. Which is a good thing, because I'm often half asleep these days. Having two young children is the most taxing thing I've ever experienced. Only recently did I come to fully understand the Army's old advertising slogan, "We do more before six A.M. than most people do in a day." I heard that as a young man and thought, "wow, they are productive, early risers." But now, after a year of waking before dawn, I know that to do something before six A.M. means you don't just get up early, you don't get much sleep.

Last night was one of those nights, although I didn't do much more before six A.M   than get my three-year old sippy cups of water. I know I didn't sleep. And that I probably wouldn't have cut it in the army, unless I was a cook. For in my bleary eyed, heavy limbed, and foggy-mind state, I did make a mighty tasty Bolognese sauce this morning. I'll consider the arguments about the best ways to make Bolognese when I'm less sleep deprived. In the meantime, I'll leave you with my recipe.

Add the beef and cook it until it is brown (crushing it with a potato masher to make bits of meat small).

Ad the wine and cook it off.

Add the stock and the tomatoes and the spices and simmer until thick (about three hours).