Home Archives About
Fear of the Natural World
In My Sleep 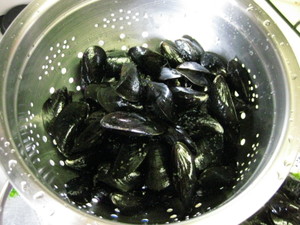 Last night we ate our big seafood feast: Mussels cooked in a cast iron frying pan with nothing but their smoky juices. I got this recipe from a column by Mark Bittman years ago. It couldn't be easier: clean the mussels, put them in a cast-iron frying pan in a single layer, and cook until they release their juices and those juices bubble off. I never really liked mussels until I had them this way. My wife Santa Maria loves them. And so does Nina, my three year old. They've been a bit of a hard sell for my toddler, Pinta, though she has shown a great interest in chewing on the salty shells and shattering them in her mouth. Last night things changed. She started gobbling up mussels themselves.

The second half of the meal was spaghetti with clams in a white wine sauce. The first time I had this dish was when I was a teenager and I was working at a retail fish market. 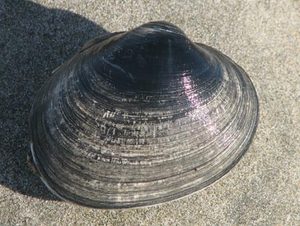 One of my coworkers was a down-on-his luck chef who was working off a debt to the store owner from his failed restaurant by putting in hours behind the counter slinging fish. Johnny, a graduate of the Culinary Institute of America, was a big bearded fellow who drove a massive tan Cadillac and enjoyed a life of excess. One afternoon he decided to make lunch. He gathered some little neck clams, chopped some garlic and parsley, and threw it in a pot with some parsley and white wine. He said it was going to be so good that it "will make your socks go up and down." And it did.

I've been serving the same dish to my family for a while now. Nina is usually full from eating mussels by the time it reaches the table and she's not so keen on the clams (in all fairness to her, they usually get overcooked, which is how it goes while getting all this food to the table). Last night, she needed some persuasion to eat the clams with her pasta. I said they're just like the mussels and you'll like them. Saying that she'll like something is usually a way of insuring that she won't eat it. Yet last night, she quietly did. And then she exclaimed, "You are right, they are really good."