Home Archives About
The Joy of Not Eating
Growing Seafood Extravaganza

Fear of the Natural World 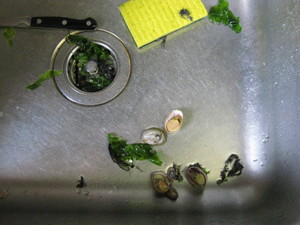 This afternoon I was cleaning mussels for our weekly seafood feast (mussels cooked dry in a frying pan; more on this later, I promise, as it is the best way I've ever had mussels and spaghetti a la vongole) when I noticed something odd. We get our mussels from our local greenmarket, which has the freshest fish in the city. I rinse them, pull the beards, and make sure they are alive and ready to be eaten. Some of the mussels, I noticed, had snails attached to their shells. As a matter of course, I pulled them off and discarded them. I've seen this before, but today I had so many of them that I could have made a meal of them. Or at least an appetizer. Yet I didn't, because I didn't know what they were. Once, before we had children, we took a trip to San Sebastian, in Spain. When we were there we had the most delicious street food--caracolitos, or some kind of snails from the sea. We at them by using pins to pick them from their shells and marveled at their taste. Could these have been just as good? I'll never know. Having grown up in the suburbs and moved to the city, I have a fear of the natural world. If a food doesn't come packaged or at least labeled in a way that I can understand, I don't know what to do with it. Knowing what to do with caracdolitos is not a problem for others. Apparently they are good for more than just eating.